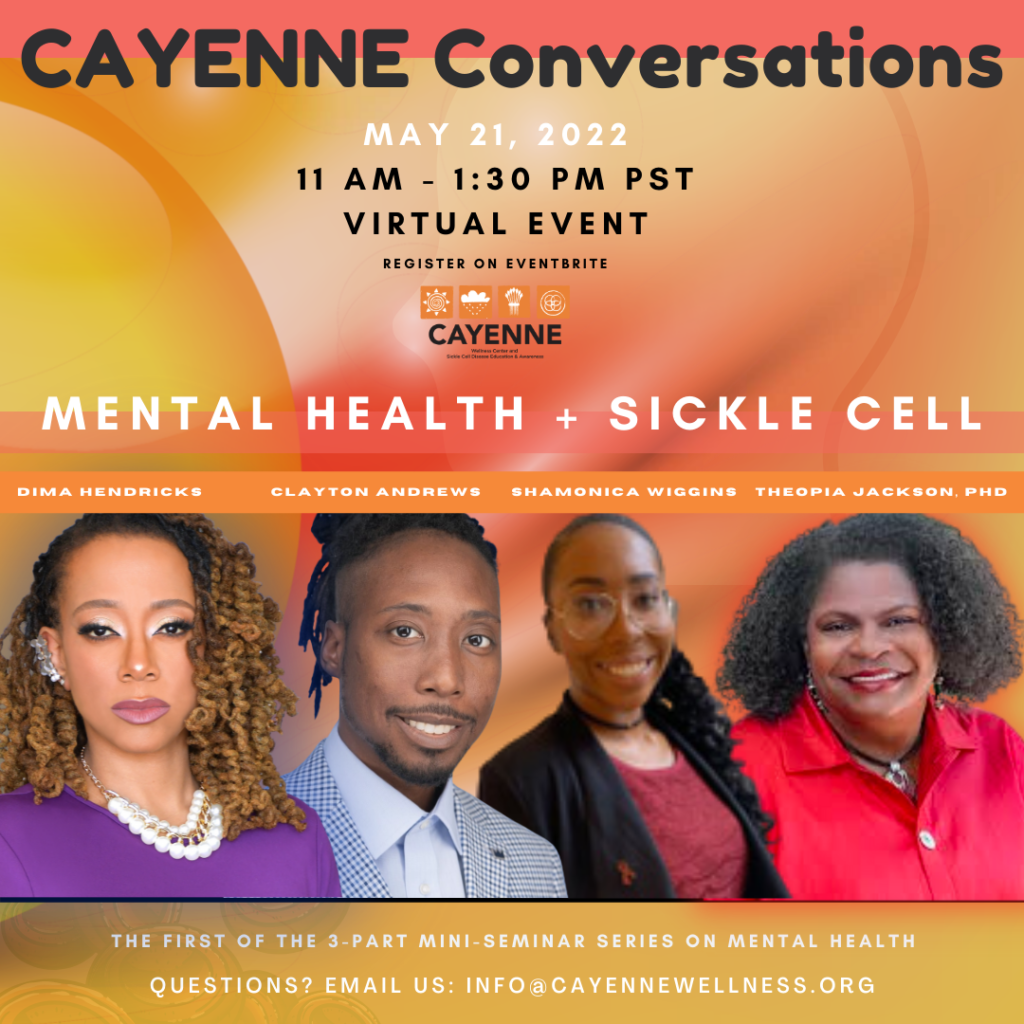 Cayenne Wellness Center will hold three miniSeminars series throughout 2022. These miniSeminars were developed because the sickle cell community wanted us to add a third or even fourth day to our Annual SCD Educational Summit. Given that we cannot go beyond three days, the opportunity presented itself for us to offer more in-depth learning experiences on particular topics. These miniSeminars are one of our most popular educational opportunities for the sickle cell community.

For our first miniSeminar: Mental Health session, SCD Warriors were invited to share their experience with; 1) DEPRESSION; 2) ANXIETY; 3) SUBSTANCE ABUSE; 4) SUICIDAL TENDENCIES/ATTEMPTS; or 5) VIOLENCE, and they have overcome the symptoms through therapy. 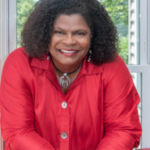 Theopia Jackson, Ph.D. is a licensed clinical psychologist who received her master’s degree in clinical psychology from Howard University, Washington DC, and her doctorate from the Wright Institute in Berkeley, California. Dr. Jackson is the immediate past president for The Association of Black Psychologists, Inc. (ABPsi) and the Bay Area chapter. She has held several leadership roles in higher education and is currently the Chair of the Clinical Psychology degree program at Saybrook University in Pasadena, California. She recently relocated to Maryland after 30+ years of practice in the Bay Area, where she held medical privileges at UCSF Benioff Children’s Hospital Oakland; she practiced in the Healthy Hearts program, Department of Psychiatry, and Comprehensive Sickle Cell Center. Her other professional affiliations include membership in the Association of Family Therapists of Northern California (co-founding member of the Cultural Accountability Committee), American Psychological Association (Council of Representatives for Division 32 Society for Humanistic Psychology), California Psychological Association, and Delta Sigma Theta Sorority, Inc. She serves on the medical advisory council the Sickle Cell Community Advisory Council (SCCAC). Dr. Jackson has a long history of providing child, adolescent, and family therapy services, specializing in serving populations coping with chronic illness and complex trauma. 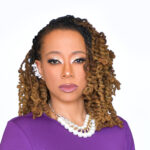 Sickle cell survivor and a child witness to domestic violence, Dima Hendricks is now an advocate and a true ambassador of change. In her role, she has facilitated health workshops and participated in panel discussions. Dima has served in various professional capacities at Wego Health, The American Heart and Stroke Association, and was a former board member of the Greater Boston Sickle Cell Association. She has also been featured in various media outlets and is the host of Public Praise T.V. Dima also has an extensive pageant resume. She won the title of Miss Black Dorchester USA, Miss Black Massachusetts USA, and Mrs. Massachusetts International. Dima also served as a pageant director, coach, and judge for over a decade. You can learn how Dima triumphed over adversity in her book Unleashing Royalty. 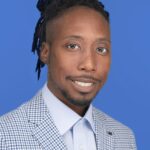 Clayton Andrews is a 39-year-old mental health professional, living with Sickle Cell Disease, residing in Atlanta, GA. An advocate, mentor and father of seven, Clayton is a Licensed Professional Counselor and graduate from Troy University with a Master of Science in Counseling and Psychology. His primary focus is the enablement and development of self-sufficiency, development and growth of mental health. Clayton is the Chair and co-founder of the Sickle Cell Champions Association (SCCA), a mentoring organization geared and designed for the guidance and empowerment of young males with Sickle Cell Disease into their transition into adulthood. Additionally, he is helping to spearhead the overall Men’s Initiative, Men’s Action Network (MAN), which places a more all-encompassing focus on the many facets and challenges that the Sickle Cell Male faces. Clayton also co-coordinates the Sickle Cell Mental Health and Wellness Initiative of the Sickle Cell Community Consortium (SC3). 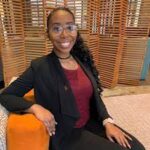 Shamonica Wiggins is a 30-year-old sickle cell warrior and a native of Dallas, TX. Although she has sickle cell SS, which is commonly referred to as the most critical form of the illness, she rarely allows it to get in the way of her chasing her dreams. This is evident in the work she did as creator and former CEO of the non-profit organization, #BoldLipsForSickleCell. Shamonica was awarded the 2018 National Sickle Cell Advocate of the Year by Sickle Cell 101. Ms. Wiggins is a trailblazer in the sickle cell community and strives to be a voice of one, speaking for many. When she’s not busy fulfilling her passion of spreading sickle cell awareness you can find her on the sidelines of the soccer field cheering on her 8-year-old daughter Roree. Shamonica prides herself as a mother and her daughter is a big reason why she refuses to give up. She hopes that her advocacy work leads to a big breakthrough for the sickle cell community and she’s not going to stop being a voice for her people until she sees the changes that sickle cell warriors so desperately need.