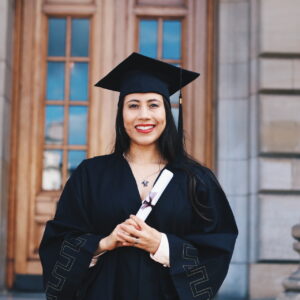 Mary Alcocer is a sharp professional with strength in leadership and passion in community building with an MSc in International Security, sub-specialization in Human Rights at the University of Dundee, Dundee, Scotland, UK. Born in Los Angeles, CA, but raised in Mexico, she has dual citizenship and is a fluent bilingual. Her enterprising personality coupled with five years of experience in the government, private, non-government and non-profit sectors has provided her with the opportunity to collaborate with diverse entities at the local, state, federal and international levels. Her current role at Cayenne Wellness Center and Children’s Foundation is Program Manager and her passion to bring vision, education and awareness to sickle cell disease has just begun.

Mary is a former-AmeriCorps VISTA, during her last service year program at SAY San Diego she stood out for her arduous collaboration with the military community in the region and for creating social sustainability, compliance with human rights, social justice, and empowering minorities and communities with social and economic disadvantages. In her first assignment as an AmeriCorps VISTA in Dallas, Texas at Children At Risk, Mary was named and recognized nationally under the AmeriCorps VISTA program for being the first Associate to achieve a Memorandum of Understanding between a foreign federal agency (Mexican Ministry of Foreign Affairs) and a non-profit organization affiliated with the AmeriCorps VISTA program. The structured collaboration was fundamentally focused on the deterrence of human trafficking on the Mexico (Chihuahua, Coahuila, Nuevo Leon and Tamaulipas) – United States (Texas) border.

In 2018-2019, during her master’s studies, she was a Member of the Alumni Association and was invited by the United Nations Association of the United Kingdom to witness a tribute made to the Former Secretary-General of the United Nations, Kofi Annan in London 2019: “Kofi Annan: Reserve his life and legacy”. She also collaborated in different student assemblies, in which humanitarian support, immigration, humanitarian displacement, armed movements and the fracturing of democracy, cybersecurity, among others topics were addressed. Before embarking on her graduate studies, Mary worked in the private sector with a law firm in San Diego, California. During that time she had the opportunity to work closely with the United States Supreme Court and the California Court of Justice on federal, state and local immigration and criminal cases. She added valuable feedback to the firm, especially on issues such as human trafficking and smuggling, hate crimes, and illicit trafficking in narcotic drugs and psychotropic substances.

One of her most outstanding work collaborations was with the Mexican government, at the Consulate General of Mexico in Atlanta, Georgia, hired as Consular Clerk in the Department of Protection. Mary represented the Consulate in forums and workshops at the local, state and out-state level on topics such as consular services and protection, immigration and consular notifications, civil rights and community development, and prevention and deterrence of human trafficking and smuggling, among many others. Her most notable contributions were taking action in two human trafficking cases; follow-up of survivors, consular protection, investigation with the Federal Bureau of Investigation (FBI) and criminal follow-up with the Court of Justice in Georgia.

Mary graduated in June 2016 with a degree in International Relations from the Universidad de la Américas Puebla (UDLAP), Puebla, Mexico. She stood out for being a Member of the Student Society for three years and was an active participant in the Latin American Model of the United Nations of UDLAP for three consecutive years as President of the General Assembly and the Security Council. In turn, she was a volunteer in two programs highlighted by the University: Social Responsibility with Rizoma Gestión Cultural and Social Service with ANTHUS A.C. National Association against Human Trafficking in Society, Civil Association. She has two important publications: 1) The Current Debate on Drug Public Policy Reform in the Americas: An Overview from the Lens of the United States with University of Dundee (UoD) in September 2019, and 2) Sex Tourism as an alternative market to the economy and employment in Tijuana; Study of the joint responsibility between the State and the Society through the State permissiveness and the insertion of the society with Universidad de la Américas Puebla (UDLAP) in May 2016.

Mary Tere is certified in human trafficking prevention and deterrence training by the Malouf Foundation and is currently being certified by Harvard University in Child Protection: The Rights of the Child in Theory and Practice.