BY THE PRESIDENT OF THE UNITED STATES OF AMERICA

Sickle cell disease (SCD) presents grave health challenges for an estimated 100,000 Americans. For some, it triggers intermittent episodes of pain, difficulty with vision, and serious fatigue. Other survivors experience this disease more acutely — SCD can cause infections, strokes, and even organ failure. For almost everyone impacted, coping with inherited red blood cell disorders means putting plans on pause, living with excruciating pain, paying for expensive treatments, and hoping for a day when medications and doctor visits no longer interrupt life. During National Sickle Cell Awareness Month, we recognize the perseverance of SCD patients, and we recommit to working with our partners in State and local government, the nonprofit space, and the private sector to develop treatments and cures for this debilitating disease.

Like many rare diseases, SCD affects our population unevenly. Black and Brown Americans are disproportionately affected. About 1 in 13 Black children tests positive for the sickle cell trait, and about 1 in 365 Black Americans develops the disease over the course of their lifetime. Due to persistent systemic inequities in our health care system, these same patients are also often the last to get help. Few specialty clinics are available for SCD treatments, information about detecting this disease is not always widely shared, and pain management can be a challenge due to the intermittent nature of sickle cell crises and persistent racial disparities in pain assessment and treatment. Moreover, there exists no universally effective cure; bone marrow and stem cell transplants have allowed some people to overcome SCD, but low donor availability and treatment-related complications render these procedures unviable for many patients.

Medical professionals and scientists in my Administration and across our Nation are working to put an end to SCD. The Food and Drug Administration recently approved new drug therapies to help patients manage their pain. Through its “Cure Sickle Cell Initiative,” the National Institutes of Health (NIH) is striving to develop safe and effective genetic therapies and exploring applications for machine learning to predict organ function decline in SCD patients. Additionally, the NIH has invited researchers to apply for funding to support large-scale clinical trials on treating SCD pain symptoms. We are closer than ever to finding a cure today for all patients, and I am optimistic about our progress.

Even so, it is still important for Americans to understand the signs of this disease, the risks of inheriting this condition, as well as the various resources available to those who test positive. Most people with the sickle cell trait do not exhibit symptoms, and many are unaware of their potential to carry on this gene. Experts agree that it is important to get tested, especially if you have family members who have been diagnosed with SCD. There are also helpful resources online to learn more about this disease, like the Centers for Disease Control and Prevention’s sickle cell information page atcdc.gov/ncbddd/sicklecell/index.html.

As we continue our quest to cure sickle cell disease, let us celebrate the strides our health experts have made in understanding and treating this condition. Let us offer strength to those Americans fighting its effects today and unite in our mission to enhance the quality of life for those diagnosed with SCD.

NOW, THEREFORE, I, JOSEPH R. BIDEN JR., President of the United States of America, by virtue of the authority vested in me by the Constitution and the laws of the United States, do hereby proclaim September 2022 as National Sickle Cell Awareness Month. I call upon the people of the United States to learn more about the progress we are making to reduce the burden of this disease on our fellow Americans.

IN WITNESS WHEREOF, I have hereunto set my hand this thirty-first day of August, in the year of our Lord two thousand twenty-two, and of the Independence of the United States of America the two hundred and forty-seventh.

Endari is indicated to reduce the acute complications of sickle cell disease in adult and pediatric patients 5 years of age and older. The most common adverse reactions occurring in greater than 10 percent of patients receiving Endari in clinical studies were constipation, nausea, headache, abdominal pain, cough, pain in the extremities, back pain, and chest pain. Endari should only be taken under the direction of a physician. Endari has received Orphan Drug designation in the U.S. and Orphan Medicinal Product designation in the EU. 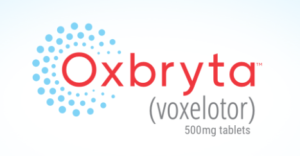 Oxbryta (voxelotor), a first sickle cell treatment that works to stop the sickling and destruction of red blood cells that mark this disease, has been given accelerated approval by the U.S. Food and Drug Administration (FDA) for patients ages 12 and older.Specifically, Oxbryta — an oral, once-a-day tablet developed by Global Blood Therapeutics (GBT) — is designed to block sickle hemoglobin polymerization, the root cause of sickle cell disease. Mutant hemoglobin polymerization refers to the clumping and sticking together of molecules into rigid, long rods (polymers) that deform blood cells, and can block small blood vessels. The resulting poor blood flow affects the oxygenation of tissues, ultimately leading to painful vaso-occlusive crises.By increasing hemoglobin’s affinity to oxygen, Oxbryta halts this process. Accelerated approval is given to medicines filling a serious and unmet need, provided they meet a surrogate trial goal. In the case of Oxbryta, this endpoint was data from the high-dose group in GBT’s pivotal Phase 3 trial. Confirmatory, post-approval safety and efficacy studies will be necessary for it to remain in widespread use, the FDA says in its label.The FDA announcement came more than three months in advance of the agency’s expected decision date of Feb. 26, 2020.

“Today is a major milestone. … When we started our journey with the SCD community more than eight years ago, we set out to transform the way this devastating, lifelong disease is treated,”  Ted Love, MD, president and CEO of GBT, said in a press release. “We are proud to bring this breakthrough therapy to the SCD community” and grateful to all who “have worked alongside us to develop this first-in-class therapy.”

“Every person with SCD experiences hemoglobin polymerization and suffers from varying severity of anemia and hemolysis,” said Elliott Vichinsky, M.D., director of hematology/oncology at UCSF Benioff Children’s Hospital in Oakland, California. “With today’s approval of Oxbryta, we now have a therapy that significantly improves hemoglobin levels, has a favorable safety profile and reduces the anemia and hemolysis that inevitably leads to the long-term and often undetected detrimental effects associated with this chronic genetic condition.”

GBT said it expects to begin marketing Oxbryta, as 500 mg tablets, to patients in the U.S. through its “specialty pharmacy partner network” within two weeks. The treatment reportedly will cost $10,417 per month, or around $125,000 per year.

The FDA based its decision on high-dose data from the randomized, global Phase 3 HOPE trial (NCT03036813). The trial assessed the safety and efficacy of 24 weeks of treatment with Oxbryta in 274 people with SCD, ages 12 to 65, compared with a placebo.

Trial findings, published in The New England Journal of Medicine, showed that Oxbryta raised hemoglobin levels in 51% of the 90 patients treated with Oxbryta at 1500 mg daily — its now approved dose — compared with 6.5% of those on placebo.

Specifically, hemoglobin levels rose over the 24 weeks to a mean of 9.8 g/dL in the patients given Oxbryta at that high dose, and to 8.9 g/dl in 92 patients treated with the 900 mg daily study dose.

At high dose, Oxbryta’s use also lowered levels of two established biomarkers of red blood cell damage: reticulocytes (by 19.9%) and bilirubin (by 29.1%).

Benefits were seen regardless of concurrent use of hydroxyurea, a standard treatment to reduce the frequency of pain crises and the need for blood transfusions.

“Oxbryta is an inhibitor of deoxygenated sickle hemoglobin polymerization, which is the central abnormality in sickle cell disease,” Richard Pazdur, MD, director of the FDA’s Oncology Center of Excellence, said in an agency release. “With Oxbryta, sickle cells are less likely to bind together and form the sickle shape, which can cause low hemoglobin levels due to red blood cell destruction. This therapy provides a new treatment option for patients with this serious and life-threatening condition.”

The U.S. Food and Drug Administration (FDA) approved Novartis’ Adakveo (crizanlizumab) to decrease the frequency of vaso-occlusive crises (VOCs), or pain crises, in adults and children age 16 years and older with sickle cell disease. Novartis indicates it expects to make the therapy available in the coming weeks.

Sickle cell disease is caused by a genetic defect in the gene that codes for hemoglobin that causes red blood cells to have a sickle shape, which affects how they carry oxygen. It also is associated with chronic inflammation, higher levels of cell adhesion proteins, including P-selectin, making the blood vessels and some blood cells stickier and tend to cluster in the bloodstream. This can lead to acute pain episodes called VOCs, in addition to life-threatening complications. Those life-threatening conditions include stroke, vision loss, blood clots in the lungs, and infections.

Adakveo is a monoclonal antibody that binds to P-selectin on the surface of the activated endothelium—the inside walls of blood vessels—and platelets. The approval was based on the results of the 52-week SUSTAIN trial. The trial showed that Adakveo lowered the median annual rate of VOCs to 1.63 compared to 2.98 for the placebo group, a reduction of 45%.

“The approval of Adakveo marks a new era in the treatment of sickle cell disease, a genetic condition that places an extraordinary burden of unpredictable pain crises on patients and their families,” said Susanne Schaffert, president of Novartis Oncology. “The stories we have heard from patients about their sickle cell pain crises are devastating. We are pleased to help reimagine medicine together with the sickle cell community and offer new hope for fewer VOCs.”

Sickle cell disease affects about 100,000 people in the U.S., according to the U.S. Centers for Disease Control and Prevention (CDC). A 2009 study published in the journal Pediatric Blood and Cancer noted that in 2005, sickle disease cost an average of $11,702 for children under Medicaid and $14,772 for patients with employer-sponsored insurance.

The projected cost of the drug is $2,357 per vial, which the expected dosage of three or four vials per month coming to $7,071 or $9,428 per month. It is prescribed based on weight. Payers are likely to be more than willing to pay it, because in addition to decreasing the pain crises, the drug decreased the median days a patient spent in the hospital each year by 42%.

Novartis picked up Adakveo when it acquired Selexys Pharmaceuticals in 2016 for $665 million. That’s quite a bargain if Adakveo sells the way it’s projected to, becoming a blockbuster, $1 billion-plus annual seller for the Swiss company.